I’ve been thinking about death. Eitan’s death, the moment of.

I went to a Reiki meditation session today. As part of my ongoing search for ways to manage the pain of losing Eitan, and Larry, I have been open to all kinds of therapy: grief, massage, acupuncture, Reiki… everything helps, in different ways. My friend Theresa is a Reiki therapist (she describes it as channeling “unconditional love”), and I had sessions with her immediately after each loss, and I had what I call a vision of Eitan, and a vision of Larry during those sessions. I use the word “vision” because each felt like a waking dream, like what I saw was not something I controlled through memory or imagination. While there’s certainly a possibility it was my own mind creating these encounters, it felt like something beyond me, and I’m grateful for the experience.

After months of people recommending it (years if I include my mom), I started going to yoga classes regularly earlier this month, and have found it helpful too. Invariably tears well up during the meditation part of the practice – they are so close to the surface, and when I lower reserves, they leak out. (I learned that “practice” is the word those in the yoga community use to describe those who do yoga, as in “how long have you been practicing yoga?” or “do such and such movement according to your practice” – I’m just kind of plunging in and going to any class labeled “all levels” and winging it.)

The class today offered at a time I could go was a Reiki mediation class, and I was the only attendee. So I got some interesting background on Reiki history. The teacher recounted a couple origin legends, and in one, the founder was told by his mentor to “try dying once” in order to find the meaning of life. He proceeded to fast for 21 days, and then received insight that later became the fundamentals of Reiki healing. This is a big oversimplification of the simplified version I was told today, but my point isn’t to espouse Reiki philosophy. Rather, it was the “try dying once” phrase that resonated with a task I have been trying to complete this week: confronting Eitan’s death.

Last Friday, I finally did speak with Eitan’s neurologist, after several days of phone tag. I had put off the conversation for eleven months. But the Globe may be doing a story about Eitan, epilepsy, and SUDEP, and I felt I needed to speak with his doctor. I was feeling anger toward the doctor, because they didn’t prevent, or foresee the possibility of, his death. This is not necessarily a rational feeling, at all, but there’s that need to blame. I certainly blamed, blame, God most of all, because that’s who I feel could have, and should have, saved Eitan. (Again, rationalization here is irrelevant.) I would have liked to have heard from his doctor, a sympathy call at least. And he did apologize for that – fallout from being divorced. He spoke with Jeff at the time, when Jeff called to tell him, so hadn’t thought to contact me separately.

I was surprisingly calm when we spoke, deferential even, through the challenges of calling up the details of Eitan’s epilepsy during his freshman year of college. The doctor was personally deeply affected by Eitan’s death, was shocked by it, really liked Eitan a lot, remembered him fondly. “You don’t need me to tell you what a great kid he was,” he said, but I said, “I’m always happy to hear it.” Truly, I can’t hear enough about Eitan in the world.

Painful to let my mind “go there,” to the ShouldaWouldaCoulda Land. We will never know if Eitan took his meds regularly, if his seizures were increasing because he wasn’t, or because the meds weren’t working any more. Or if I had stayed by his side in his dorm room that night, and every single night, a guarding a maternal angel, could I have saved him? Because I know that is not the life we gave him, to be under constant surveillance. I could not, and I would not – and most certainly should not have been a literal, actual presence in his daily life, always there at his elbow to keep him safe.

So I have been trying to make myself “witness” his death because it is impossible and awful and so difficult. But he is my son, and he experienced it. I think of when he and his siblings were small, and had blood taken, or shots. And, needlephobe that I am (I still need to be reclining when I get shots), I would force myself to watch when my kids got shots, because they were experiencing it, and I didn’t want to hide from their pain.

When Eitan was 11 months old, he had to have a branchial cleft removed from his neck. This is small gill-like opening left over from the embryonic stage of development. It was considered elective plastic surgery, but Eitan’s pediatrician recommended we have it removed, which we did just before he turned 1.

My mom stayed with Gabriel, then 4, and we drove in the very very early morning to the hospital. I held Eitan as they gave him knockout gas – or perhaps it was a shot, that I don’t remember clearly. But I remember making myself watch him as he went from a squirming, giggling 11-month-old to a dead sleeping weight. It was disconcerting how quickly he slipped into artificial sleep, but I felt I had to witness it properly, I owed him that. And then a nurse gently removed him from my arms, placing him on the operating table, and I was escorted from the room – wisely not given the option to watch the actual operation. Less than an hour later Eitan was back in my arms, groggy, and we drove him home, and he came more and more into himself during the brief ride, so that when I carried him through the front door and put him down in the hallway, he was off running to the kitchen, looking for his brother, ready to play.

So I wonder about those moments, sometime between 3 in the morning when Eitan said goodnight to his roommate and 9am when his roommate found him lying facedown next to his bed. We don’t know exactly what happened, but I believe it was a seizure, the paralyzing uncontrollable movement that would start with a tremor in his right hand and spread to his entire body, shaking like a parody of what we think epilepsy grand mal seizures look like because they really do look that way, body shaking shaking shaking, but inside, lungs paralyzed, seizure denying him the involuntary inhale and exhale we take so for granted, that luxury, his breath frozen and cut off. Did he know he was dying, my sweet boy? Did he try to fight the debilitating seizure that pushed him from the bed, face immobilized into a suffocating pillow? He was blue, his roommate’s mother told me, yes, he was, and I wanted not to know this even as I asked if he was, remembering that last seizure I had witnessed, and here is when God could have intervened, could have tilted his head just so, could have let that exhausted air out, and precious new air in, and in, and out, sweet sweet air coloring his skin rosy pink again. Yeah, God could have just not given him epilepsy in the first place too, where, when, should the miracle have happened?

I read the autobiography of Malala, the Pakistani girl who has been a spokesperson for girl’s rights to go to school in her country, who was shot pointblank in the head by the Taliban, yet survived, and how can that not be a miracle? And why couldn’t Eitan have had such a miracle, such a close call?

Again with the Why, why? I am left helpless in my ongoing belief in God, even as I feel betrayed by God, even as I still need to pray, even as I try to determine what my relationship to God is in this new normal. So I force myself today, seven times seven weeks since that awful day, to think of  Eitan’s silent struggle with the angel of death, and I hope there was a bright golden light of welcome, caressing him into wherever the next place is. Is that next place like this, one of growth in stages? When we arrive, are we newborns again, naïve to the ways of that place, growing to learn them, forgetting every moment of gestation?

Or do we have the knowledge of our lives in us still, are we given the power to communicate so very cryptically, through rainbows and birds and insects and white butterflies, through seeds on a breeze, through dreams, through visions?

I could not see my son in death, when we went to Florida after the call. His brother, father, my mother, saw the body that no longer housed his soul, but I could not, did not want to witness that, even as now, 343 days later I am trying to become an imaginary witness to the experience of his passing, and a true witness to his past.

The rabbi had said either choice would leave regrets. I am trying to bear witness now, not to his death, but to his life, with these reflections and recollections, to remember him as I knew him, and more than I knew, through the stories of those who knew him beyond me. He was not perfect, except he was absolutely perfect, in his flaws and kinks and humanity, his lies and truths, his anger, delight, scorn, contempt, irony, amusement, deep deep voice, throaty laugh, long fingers that could shape clay and type original thoughts, a mouth that could bend into the most joyous smiles, big black brown eyes, such big eyes, everyone said when he was small, he grew into those big eyes, his size 13 feet he thought were 14 for a while, too big to find shoes at Target, that widow’s peak he got from me that he sometimes emphasized, sometimes had shaved away with his haircuts, so stubborn when he just knew he was right, even when he absolutely wasn’t, and the deep down utter sweetness of heart, my boy, my son.

I love this shot of Eitan in 1995, a couple months after that operation, heading with determination down the street, independent from the get go. A closeup highlights that purposefulness. He left way way way too soon, but I am grateful that he did get six months, a chance, a taste, of college life, growing up and away. 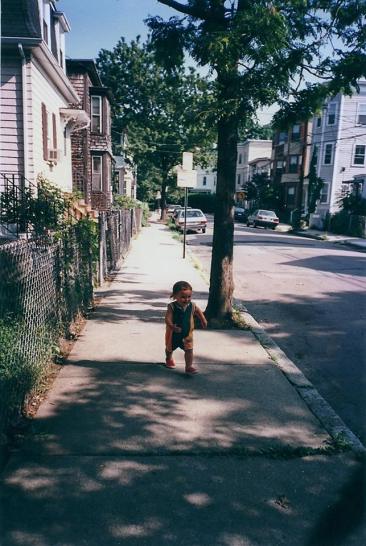 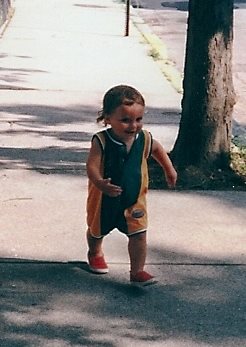 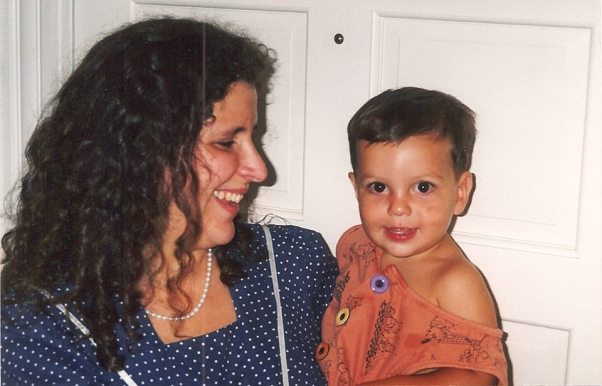 But still liking to be carried

© Lisë Stern and EitanSternRobbins.wordpress.com, 2013-2018. Unauthorized use and/or duplication of this material (writing and photographs) without express and written permission from this blog’s author and/or owner is strictly prohibited. Excerpts and links may be used, provided that full and clear credit is given to Lisë Stern and EitanSternRobbins.wordpress.com with appropriate and specific direction to the original content.